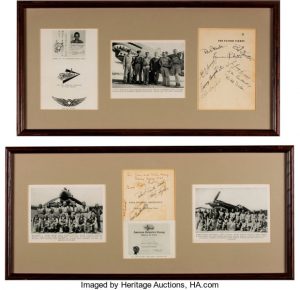 “Yesterday, December 7, 1941–a date which will live in infamy,” began President Franklin D. Roosevelt’s  to Congress, “-the United States of America was suddenly and deliberately attacked by naval and air forces of the Empire of Japan.” Roosevelt’s statement, one day after the attack on Pearl Harbor, is regarded as the beginning of the United States’ involvement in World War II. Seventy-eight years and one week after the attack, the Historic Flags of World War II auction, presented by Heritage Auctions, will offer lots related to Pearl Harbor and World War II.

One of the auction’s highlighted lots is the original record of President Roosevelt’s 9 P.M. meeting the day of the Pearl Harbor attack. The report was typed by Myrtle Bergheim, the assistant to the President’s secretary. It outlines the briefings President Roosevelt received hours before his address to Congress. Bergheim saved this record herself, realizing its historical significance. Also included in this lot are other documents Bergheim preserved, most notably a list of people to include in a World War II memorial.

Also available is an American flag from the USS California. The vessel was stationed at Pearl Harbor at the time of the attack. Two torpedos and one bomb struck the USS California, and the ship returned fire until it ran out of ammunition. The flag comes to auction in fair condition, and a full condition report is available in the lot description.

Another notable flag presented in this sale is an official presidential yacht flag from Franklin D. Roosevelt. Writing on the flag indicates it once flew on Mare Island, a peninsula near San Francisco.

Rounding out the auction’s featured lots is an encryption machine used by German forces during World War II. Heritage Auctions indicates in the lot description that most devices of this nature were either destroyed by the Germans to keep them away from Allied forces or destroyed after the war by order of Winston Churchill. Those interested in any of these lots can register to bid on  Heritage Auctions