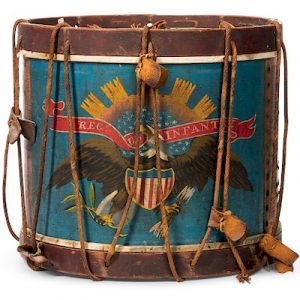 Skinner’s upcoming firearms sale will feature a range of military items, including Dublin castle pistols and pommel sabers. The Historic Arms & Militaria auction will offer 443 lots, particularly featuring a lead hand likely sourced from the statue of King George III in New York City. Local legend suggests that the hand was one of the pieces that loyalists living in the area took when the statue was removed in 1776.

Another highlighted lot is a ten-pound Parrott rifle. Invented by Captain Robert Parker Parrott, this artillery weapon was extensively used in the American Civil War. However, the rifle on offer is an early example created before the war. Other featured lots include a Siege of Boston carved powder horn belonging to Daniel Barns. According to Bill Guthman (a late museum consultant, author, and collector), the piece is among only three known Siege of Boston horns by the same maker, known as the Simsbury carver. To view the complete catalog and register to bid, visit Bidsquare.