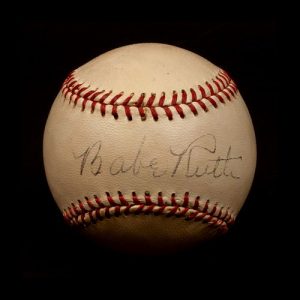 Hindman’s Sports Memorabilia auction will present a baseball signed by Babe Ruth, one of the 20th century’s most celebrated athletes. Ruth has been dubbed an “American legend” for his skills in the field. He played a key role in transforming the New York Yankees into an iconic baseball team. Throughout his career, he set many records as a pitcher and outfielder.

Over 150 lots will be auctioned in the upcoming October sale. Basketball memorabilia collectors will find a 1994 bronze maquette of Michael Jordan. This piece is one of only 55 that raised money for the James Jordan Boys & Girls Club. It depicts a player suspended in the air in an attempt to score. Also available in the sale is a serigraph by LeRoy Neiman depicting a Super Bowl XXII football game. This 1988 limited edition shows the Washington Redskins playing against their opponent, the Denver Broncos. Washington quarterback Doug Williams can be seen dropping back for a pass. Those interested in this or any other lot can register to bid on Bidsquare.