Hindman Brings Over 300 Lots of Fine Furniture and Decorative Art 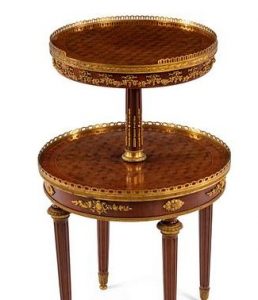 Emmanuel Villanis was a prominent 19th-century sculptor known for the realism in his bronze works. His style mostly used asymmetrical lines, including flower stalks and vine tendrils, to reflect the objects present in nature. Many of Villanis’ works were based on characters from mythology and literature. The upcoming Fine Furniture, Decorative Arts, and Silver Online Only Auction, presented by Hindman, offers an 1890 carved marble bust of a woman created in Villanis’ style. In this sculpture, the influence of traditional Neoclassicism and the Art Nouveau movement can be observed.

The auction also includes a Napoleon III two-tier table from the early 20th century. The Napoleon III style was popular between 1844 and 1870 and used elements of the Rococo style. Another 20th-century piece is a wallpaper panel mounted on a floor screen. The panel depicts a landscape view of North America. To view the full catalog and register to bid, visit Bidsquare.