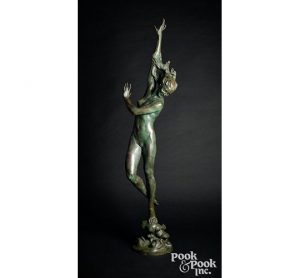 Leading the second session of Pook & Pook, Inc.’s upcoming Americana & International auction is Crest of the Wave. It is a bronze sculpture by Harriet Whitney Frishmuth, a leading sculptor of early 20th-century America. She is known for her energetic pieces that capture athletic nudes in motion, like Joy of the Waters. It shows Slovenian model Desha Delteil jerking her foot away from a cold wave. After a patron saw Joy of the Waters in a neighbor’s garden, he wanted a version for himself. So Frishmuth created the modified Crest of the Wave piece in 1926 to prevent any feelings of competition between her neighboring patrons. The available bronze is one of 22 casts produced by the Gorham Foundry.

The upcoming sale will also present a bronze sculpture of a man’s head from one of Harriet Whitney Frishmuth’s contemporaries, Elie Nadelman. The subject wears a rounded hat tipped jauntily to one side. His features are sharp and defined with a particularly pointed chin. Born in Poland, Nadelman amassed a significant collection of folk art while sculpting almost exclusively in an early Greek style. The auction catalog includes bronze pieces from other key artists of the 20th century, including Malvina Hoffman, William Zorach, Eduardo Paolozzi, and Dame Elisabeth Frink.

Several notable pieces of fine art are on offer as well. Among them is a Mickey Mouse color screenprint from Andy Warhol’s Myths series. Launched in 1981, this series immortalized American pop culture icons and covered them in diamond dust. The available print is numbered 147 of 200. Collectors will also find a drawing from Damien Hirst that depicts a skull, butterfly, and shark, as well as a landscape painting by Eric Sloane. Antique furniture items will also be up for bid, including a Queen Anne walnut high chest, an American Federal three-part secretary desk, and a Chippendale marble and cherrywood side table. Find the complete listings and register to bid on Bidsquare.