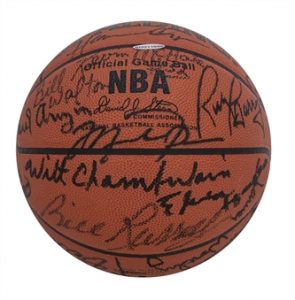 A 2009 Bowman Chrome Draft Prospects Mike Trout card signed by the then-minor leaguer will highlight the upcoming sports memorabilia event, presented by Goldin Auctions. The card is graded MINT 9 by BGS. Trout’s blue-ink signature on the card earns a “10” from Beckett. When Mike Trout was drafted in 2009, major league scouts had a favorable outlook on his career. However, they did not expect his quick rise in the following years. “In March [2012], Trout was one of the three best minor leaguers alive. By April, he was arguably the best minor leaguer alive. By June, he was probably the best major leaguer,” summarizes Baseball Prospectus’ Sam Miller.

Baseball card collectors will also find rookie cards for both Hank Aaron and Nolan Ryan among the featured lots. The Hank Aaron card is graded MINT 9 by PSA. Goldin Auctions notes that there are only 25 examples with this grade and only two with a grade higher. Basketball fans can consider Air Jordans signed and worn by Michael Jordan during his rookie year. Those interested in this or any other lot can register to bid on the Goldin Auctions website.