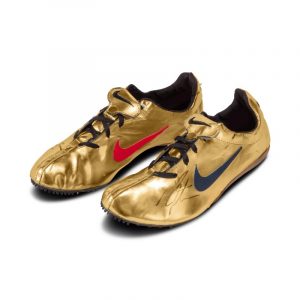 Eminent sprinter Michael Johnson made a particularly striking appearance in the Atlanta Summer Olympics of 1996. He entered the race wearing a custom-made pair of Golden Nikes. It was a bold statement to sport the golden shoes before the results were announced. However, Johnson went on to win two gold medals for the 200 and 400-meter sprints and was nicknamed “The Man with the Golden Shoes.” Sotheby’s will offer the historic pair of shoes worn and signed by Michael Johnson in an upcoming Olympics-themed auction. Nike designed the shoes to match Johnson’s distinctive running style. Another notable highlight is a rare pair of Converse Fastbreak sneakers. Michael Jordan signed and wore the shoes during the 1984 Olympic Trials. Jordan wore Converse before he signed with Nike in his rookie season.

The sale also features a 50-second animated illustration drawn by Muhammad Ali depicting “the fight of the century.” The illustration captures the world-famous fight between Ali and Joe Frazier. Chop Studios animated Ali’s original drawing under the direction of Muhammad Ali Enterprises. The lot also includes a PDF file of a letter penned by Lonnie Ali. To view the complete catalog and register to bid online, visit Sotheby’s.