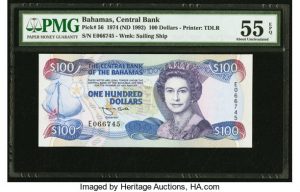 Zanzibar has a long history as a trading point for fine goods and spices, but it was not until 1908 that Zanzibar started printing its own money. The currency was eventually released in denominations of 5, 10, 20, 50, and 100 rupees. Only 500 of the notes printed from 1908 to 1928 are known to have survived the following century. The upcoming FUN World Paper Money Signature Auction offered by  features one such first issue, five rupees banknote. The piece has an ornate design on the front; to the left, a dhow, a lateen-rigged ship frequently used on the Indian Ocean, can be seen. On the right side, farmers collect a fruit harvest. The uniface note is blank on the reverse.

Another highlight of the auction is a 20 balboas note, the highest denomination banknote issued in Panama by the country’s president, Arnulfo Arias, on October 2, 1941. A week later, Arias was ousted from power and many of the newly released notes were withdrawn and destroyed. A 20th-century 25 dollar Canadian note is also featured. These were issued to celebrate the 25th anniversary of King George V and Queen Mary’s reign. The back shows a highly detailed vignette of Windsor Castle in purple ink. For more information and to register to bid, visit Heritage Auctions.