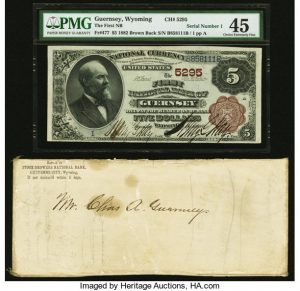 In the upcoming FUN Currency Signature Auction, presented by Heritage Auctions, over 4,700 pieces of currency will be available. Offered in the sale is a $100 Compound Interest Treasury note. The bronze overprinted note is an original piece, printed between 1863 and 1864. The United States Treasury Department set an interest rate for these $100 notes, allowing them to compound twice per year over the course of three years. Suspended due to the Treasury’s financial instability, under 500 of these bills are known to have survived.

This auction will also include a newly discovered serial number 1 $5 Brown Back note from Guernsey, Wyoming. The note was coincidentally found in a file cabinet in a West Coast estate, safely tucked in an envelope. Only 400 sheets of $5 Brown Backs and 362 sheets of $10 and $20 Brown Backs were printed by the National Bank of Guernsey during the single year it operated. These notes remained undiscovered until this serial number 1 note was found. Another available lot is a Juneau $10 Plain Back Fr. 632 note, one of just a few that were counted in the census of Alaska’s capital city in 1902. View any of these lots and register to bid on Heritage Auctions.