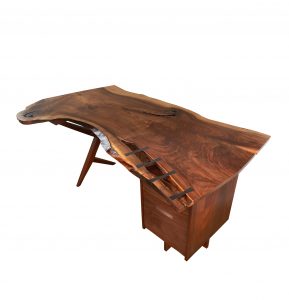 This June, Freeman’s will offer 19 lots of 20th-century furniture and decorative objects in its Select Design sale. Among them are 11 lots of furniture by Japanese-American woodworker George Nakashima (1905 – 1990). An architect and furniture maker, Nakashima produced some of the most influential furniture designs of the post-war era. He focused on the natural beauty of wood; his designs emphasized every knot, fissure, irregularity, and crack. Wooden keys, visible dovetails, and butterfly joints characterize Nakashima’s hand-crafted furniture. One of the leading lots of the upcoming auction is a Conoid desk by George Nakashima. Made from English walnut, American black walnut, rosewood, and hickory, the piece has a long fissure bridged by four butterfly joints.

Another featured item of the event is a 1929 fire screen by Samuel Yellin. A Russian-American designer and metalworker, Yellin played a significant role in the American Arts and Crafts movement. He made fine ironworks that ranged from gates, windows, and railings to fire screens, sconces, and chandeliers. Also in the sale are decorative items from Tiffany Studios, June Schwarcz, and Michael Graves. View any of these lots and register to bid on Bidsquare.