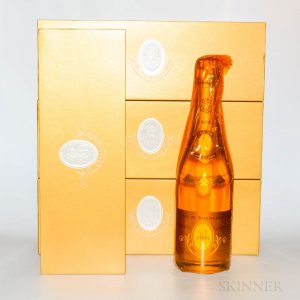 The most notable lots of the upcoming Fine Wines & Rare Spirits auction, offered by Skinner, are wines from such French estates as Château Lafite Rothschild, Domaine de la Romanée-Conti, and the estate of the late Henri Jayer.

Jayer began operation under his own label in the 1950s. By the time he fully retired in 2002, he was noted for his contributions to Burgundian winemaking. His wines are represented in this auction with two lots from his Vosne-Romanee Cros Parantoux vineyard, one bottled in 1978, and the other in 1993.

The Domaine de la Romanée-Conti estate in Burgundy, France, produces some of the world’s most expensive wines. The estate’s 2014 La Tâche is among the lots with the highest estimated value in this auction. In the lot description, Skinner includes details on how long this wine should be allowed to age: “[T]o drink it when fully mature… will require in the range of 20 to 25 years of cellaring.” Register to bid online on Bidsquare.