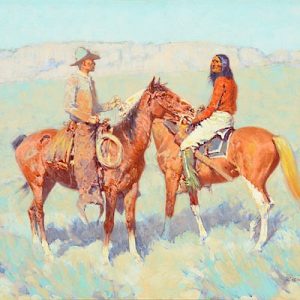 By the last quarter of the 19th century, the American era of cowboys and Indians and the open West was coming to a close. An artist, Frederic Remington lost much of his savings trying to be a cowboy in Kansas. But he still told tall tales of the frontier and gladly documented the era’s last years and helped it transition from reality to legend. “I knew the wild riders and the vacant land were about to vanish forever,” Remington once wrote, “Without knowing how to do it, I began to record some facts around me, and the more I looked the more the panorama unfolded.”

Interpretations of the Wild West from the generation (or, in some cases, multiple generations) after its decline are included in the auction. Among the most notable pieces is Frederic Remington’s “Casuals on the Range”, an oil painting of frontiersman and Native American not fighting but communicating. Depicting more of Native American life is Laverne Nelson Black’s “Taos”. Originally from Wisconsin, Black spent his summers traveling west, particularly to Taos, New Mexico, to sketch Native American subjects; Howard Terpning’s “Paints” (1976) of Native Americans prepared for combat on horseback. Terpning grew up fascinated with the American West but only dedicated himself to the subject after a successful career designing movie posters, most notably Lawrence of Arabia (1962) and The Sound of Music (1965).

Included, also, is Mian Situ’s “Golden Spike Ceremony”, a commemoration of the First Transcontinental Railroad. Situ began painting scenes from this era to better depict Chinese Americans involved in the Gold Rush and the building of the First Transcontinental Railroad. The Fine Western & American Art auction, an annual event presented by The Coeur d’Alene Art Auction, is a diverse collection of fine art representing numerous artists’ interpretation of cowboys, Indians, and the Wild West. Interested collectors can register to bid on Bidsquare.