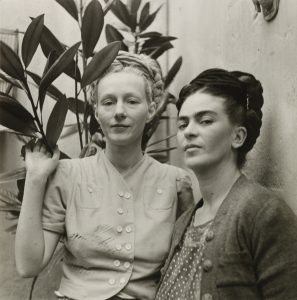 Robert Mapplethorpe was known for his black and white photographs of celebrities and both male and female nudes. His often controversial images sparked many discussions and debates about the right to freedom of expression. The upcoming auction, presented by Swann Auction Galleries, highlights the work of Mapplethorpe featuring the first World Women’s Body Building Champion Lisa Lyon. The 1980 silver print shows Lyon with her face covered by an elaborate hat while her arms are clearly visible.

The American Monument by the prominent photographer Lee Friedlander is also presented. This set of ten original silver prints is a deluxe edition published by the Eakins Press Foundation. Considered an inspirational photography book, The American Monument contains pictures of hidden historical monuments around the United States. Another highlight is a 1985 silver print of Andy Warhol and Jean-Michel Basquiat taken by Michael Halsband, a documentary filmmaker. The comic portrayal of the artists in boxing attire captures their friendship and competitive spirit. A print of the celebrated V-J Day in Times Square photograph by Alfred Eisenstaedt is also notable. Works by Ansel Adams, Robert Frank, and Eliot Porter round out the sale. Interested collectors can explore the full listings and register to bid online on Swann Auction Galleries.