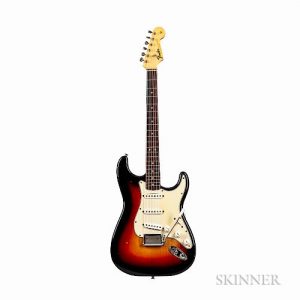 The musette de cour is a type of bagpipe that was popular with the French aristocracy in the 17th and 18th centuries. But as the aristocracy was usurped during the French Revolution, so too was the prevalence of this bagpipe. An 18th-century musette de cour is available in the upcoming Fine Musical Instruments auction, presented by Skinner. This auction is also set to include guitars, saxophones, and violins.

Available in this sale is an 18th-century violin by Joseph Gagliano, the son of noted violin-maker Nicolo Gagliano. “His early instruments showed him to be very skilled,” says Rare Violins of New York on the younger Gagliano’s abilities, “and his work was at times comparable to his father’s.” This particular violin was produced in 1761 and comes with a case and two bows. Among the many guitars available in this auction is a Fender Stratocaster electric guitar from 1960. Several modifications were made to it, including changes on its neck. View each lot and register to bid on Bidsquare.