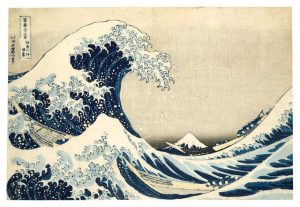 To create a masterpiece is to be patient. An ample amount of time is required to compose an art that brings out a sense of awe. This September, Bonhams awes its audience with a renowned piece by Japanese painter, Katsushika Hokusai. He created “The Great Wave off Kanagawa” after 60 years of producing unique artworks. The Oban Yoko-e print is Hokusai’s best-known work which was able to influence the Impressionist art movements of the 19th century. The work is a symbol of great spiritual importance in Japanese culture.

Collectors will also witness a series of imposing works, such as a pair of figures of Nio (temple guardians) with its detailed woodwork and distinct patterns. Alongside is an illustration of Buddhas and Boddhisattvas of the ten directions, where the directions represent ten realms of Buddhas. Notable Korean artwork include Dal hangari- moon jar, which is a piece built with heft and grace. Characterized by a lunar arc and settled base, this monochromatic porcelain is a pot of elegance. Go through the intriguing catalog of 1000 lots on Bonhams.