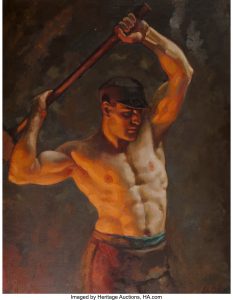 The monthly Fine & Decorative Auction for September, offered by Heritage Online is anchored by a wide variety of fine art, but also includes many chairs, bowls, vases and other ornamental and functional items. Of the works, creating a good deal of early interest and bidding, is a breathtaking landscape by Robert William Wood (American, 1889-1979) titled Mountain Majesty. Wood was born in England, but emigrated to the United States and became well-known in the 1950s with the sale of millions of color reproductions of his work. He was active in the art colonies of San Antonio, Texas in the 1930s, Monterey, California in the 1940s and Laguna Beach in the 1950s.

Another piece garnering early interest by buyers is Metaphysical Horse by Mihail Chemiakin. Chemiakin is a Russian painter, stage designer, sculptor and publisher. Though he studied at the school of art at the Il’ya Repin Institute of Painting, Sculpture and Architecture in Leningrad, he was expelled in 1961 for failing to conform to Socialist norms of realism.

One of the more unusual lots is a framed fossil of a gar, which is a very primitive fish, readily identified by their ganoid scales. The Green River Lagerstätte gar is not common compared to the numerous other species of fossil fish found in the same Wyoming locality. Its elongated snout and conical teeth indicate a predatory diet likely consisting of other fish. This large specimen measures 39 inches (99 cm) from tip to tail and is in a mottled matrix joined by two smaller fossil fish. Framed and ready to be installed on your wall.

View any of these lots and register to bid on Heritage Auctions.