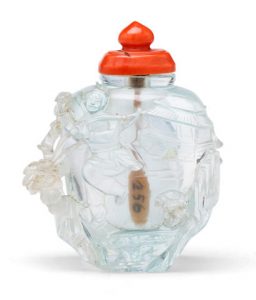 Smoking tobacco in Qing Dynasty China was strictly prohibited. But snuff, or powdered tobacco, was allowed because the Chinese viewed it as a legitimate treatment for colds, stomach issues, and other ailments. The Fine Chinese Snuff Bottles auction, offered by Bonhams, presents 158 examples of the elaborate snuff bottles used throughout the country.

Despite their size, each bottle contains an intricate design. One of the most elaborately-decorated snuff bottles is the “Hundred Boys” bottle. The brilliant blue glass with the white design on top gives this bottle a distinct look. On one side, boys walk across a bridge while another group of boys plays in the water below. The other side also depicts two sets of boys. One plays chess while the other group fights. Produced sometime in the 19th Century, the bottle gives the impression of youth and joyfulness.

A snuff bottle with pink glass and a brown overlay is another notable piece in this auction. Like the “Hundred Boys” lot, this pink bottle also tells a story about opposites. This time, a magpie sits on a plum tree watching another magpie who sits on the rocky ground. The pink glass and brown overlay emphasize the juxtaposition of the ground and plum tree.

Among the more affordable pieces is a porcelain snuff bottle depicting eighteen Luohan. Luohans are high-level practitioners of Buddhism who have not quite yet reached enlightenment. Those interested in any of these pieces can register to bid online on Bonhams’s website.