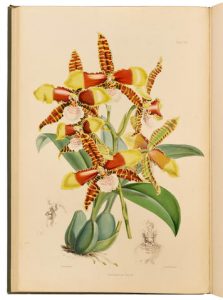 Shakespeare’s Macbeth was originally printed in the First Folio of 1623 and was not offered separately until 1673. A copy of that first 1673 printing will be presented in the Fine Books and Manuscripts auction, offered by Bonhams. A 1939 census of Shakespeare’s plays found only three of the offered edition in existence. The provenance of this copy includes actor Charlton Heston, who played Macbeth on both stage and screen. Other early Shakespearean works in the sale include The Tempest, Julius Caesar, and a collection of forgeries.

Beyond Shakespeare, there is a first edition copy of Compleat Body of Gardening by John Hill. Originally published as a weekly guide to seasonal flowers and plants, this collected version is heavily illustrated. Other notable lots in the sale include a handwritten letter by Franklin Delano Roosevelt on White House stationery, a Pacific Railroad survey “to Ascertain the Most Practicable and Economical Route for a Railroad from the Mississippi River to the Pacific Ocean,” several religious works, and more. View any of these lots and register to bid on the Bonhams website.