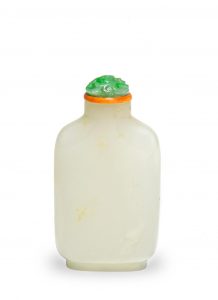 Chinese snuff bottles have fascinated collectors for many years. Originally designed to import ground tobacco to China in the 18th century, these smalls bottles became their own artistic medium as their designers carved, shaped, painted and etched them into completely unique items. Oakridge Auction Gallery offers a collection of Chinese stuff bottles as part of their two-day Fall Fine Asian Art and Antiques auction.

The small bottle with the most intrigue is an 18th century bottle made from white jade. The stark contrast between its white body and green jadeite stopper gives it a bright and appealing appearance. Next, an intricately carved snuff bottle of Chinese coral from the 19th century displays in great detail a vase of flowers with two lucky coins on one side, and a dog with two stylized pennant shapes on the other. Lastly, the bright pink of an enamel snuff bottle stands out against the muted earth tones of many of the other options. With fine detailing, the painted thin vine pattern across the pink surface with two scenes – one, of a cat in flowers and the other, a sheep and two lambs. Collectors may view the remaining lots and register to bid on Invaluable today.