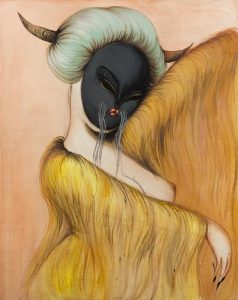 Popularly known as “The Shadowman,” Richard Hambleton started his career as a graffiti artist alongside a group of confidants and collaborators that included Keith Haring, Jean-Michel Basquiat, and Kenny Scharf. His work includes series such as Mass Murder, Shadow Head Portraits, Marlboro Man, and Shadow Man. He is one of many artists being featured at Fine Art: Street & Contemporary Online Only Auction by Julien’s Auction with the piece ‘Shadow Head’. The item is Richard Hambleton’s 2017 portrait of Emmy-Award winning entertainer Eamonn McCrystal. Created in conjunction with the last exhibition of Hambleton’s work before his death, the item is accompanied by photographs of the artist executing this work.

Along with Hambleton, this timed auction features an array of work by Andy Warhol, Banksy, KAWS, Ai Weiwei, Shephard Fairey, JR, RETNA, and more. Another lot featured in this auction is a slipcased first edition Beautiful Losers exhibition catalog housed in a custom-designed, military-grade wooden case. The catalog contains several limited edition items and original works of art by the Beautiful Losers. Also included in the sale is a custom Norley Cafe Racer motorbike.  A Norton and Harley Davidson hybrid, the bike has been built by Santiago Chopper Specialties. Explore the full listings and register to bid online on Julien’s Auction.