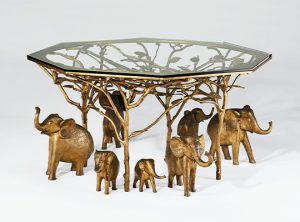 Sydell Miller affectionately referred to her Palm Beach mansion as ‘La Rêverie’ or ‘The Daydream.’ Beyond the estate itself, which sold for USD 105 million in 2019, La Rêverie also housed much of Miller’s fine and decorative art collection. A gold and black color theme unified pieces from numerous countries and centuries. Now, Christie’s presents 170 works from this highly-curated estate.

A table by François-Xavier Lalanne and two sphinxes by his partner and fellow artist Claude Lalanne headline the catalog. François-Xavier dedicated much of his career to depicting animals, including his debut ‘Zoophites’ show with Claude. The table on offer from La Rêverie is supported by tree branches made of gilt bronze. The seven elephants surrounding the trees are free-standing, giving collectors countless choices on how to display this piece.

Despite working alongside François-Xavier on the Zoophites series, Claude did not have the same passion for studying and depicting animals. Her subjects of choice included plants and icons of antiquity. This sale includes examples the latter with two sphinxes by Claude Lalanne. Appearing at first to be a faithful recreation of ancient Egyptian sphinxes, viewers will notice children’s heads replacing those of the pharaohs. At La Rêverie, these sphinxes guarded the property’s entrance.

Bidders will also find several fine art pieces, including John Cage’s Medicine drawings. The composition of this piece pulls from one of Cage’s artistic influences, Jackson Pollock. It is also an uncharacteristically chaotic piece from an artist known for exploring minimalism. “There is no such thing as an empty space or an empty time,” said Cage. “There is always something to see, something to hear.” Those interested in this or any other piece can register to bid by visiting Christie’s.