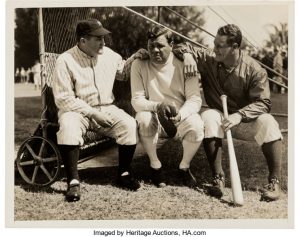 The Boston Red Sox sold Babe Ruth to the New York Yankees in late 1919. In New York, Ruth became one of the most well-known baseball players in history. A news photograph of Ruth and his first wife from an article announcing his move to New York is available in the upcoming Vintage Sports Photography event, presented by Heritage Auctions. The auction notes that few photographs exist of Ruth with his first wife, Helen, who died in a 1929 house fire.

Collectors interested in Ruth can also consider a 1924 photograph of the player with bubble gum on his cap. The photograph was taken by Charles Conlon, whose photographs were used for trading cards throughout the early 20th century. Beyond Ruth, bidders will also find an early 1910’s photograph of Walter Johnson, the first pitcher to reach 3,000 strikeouts. Hall of Fame hitter Ty Cobb said that the first pitch from Johnson he ever saw “hissed with danger.” The available photograph in this auction was used for Johnson’s Cracker Jack cards. It also illustrates Johnson’s deceptively slow pitch delivery. Register to bid for this event on the Heritage Auctions website.