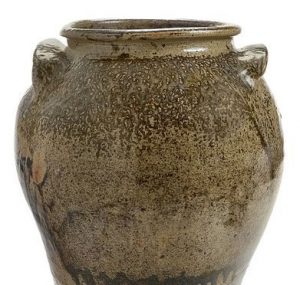 David Drake was a 19th-century American potter known for his exceptional stoneware. Drake was a slave who worked at factories in the flourishing pottery state of South Carolina. When he was active, the artist was among the few literate slaves in America. His works were often signed with his initials or contained poetic verses. The upcoming Brunk Auctions event will present stoneware jars attributed to Drake. One highlight is an early Drake-attributed jar produced at the Pottersville Stoneware Manufactory. The available 1836 stoneware jar has a dark brown and tan alkaline glaze. Drake’s works were famous for their high strength and beauty.