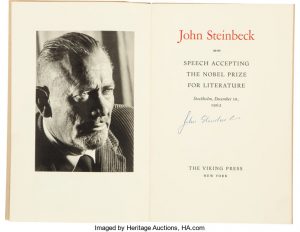 A pivotal figure of the 20th century literary scene, John Steinbeck was best known for his wry, unromantic portrayal of the Great Depression. In the upcoming Signature Internet Auction presented by Heritage, 36 items from John and Elaine Steinbeck’s estate will cross the auction block. Numerous drafts, typescripts, and letters written by or relating to the writer will be available. The leading lot is a journal written by Steinbeck between 1946 and 1947. He used it as a warm-up exercise, getting him in the correct frame of mind to work on The Wayward Bus and The Last Joan. It shares intimate details of his personal life and has been well-preserved.

Letters directed to Steinbeck from John F. Kennedy and Jacqueline Kennedy are also included in this sale. The President was looking to include Steinbeck in future artistic collaborations with the government, while the First Lady wrote to discuss a possible biography of her late husband. Several artistic works dedicated to the writer and some of his everyday possessions—such as an inkwell and paperweight—are also available. To view the complete catalog and register for bidding, visit Heritage.