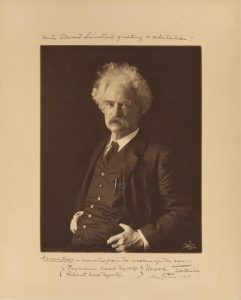 Bonhams’ upcoming manuscripts auction will offer ten historical documents that remain relevant today. Among the lots up for bid are the earliest two of Leonardo Bruni’s Platonic dialogues. Phaedo (1405) teaches of the immortality of the soul as Socrates faces death, and Gorgias (1409) looks into virtue and rhetoric. Also available is a letter by Albert Einstein to a fan group in New York, humorously accepting a role as their patron saint. In his lighthearted acceptance, he offers a motto to the members: “Seek to understand, despise no one, believe nothing blindly.” The letter is signed in his hand.

Other items in the sale include the handwritten final two lines of Walt Whitman’s “A Thought of Columbus,” along with corrections on the back of an envelope. Rounding out the auction is a photo of Mark Twain signed and inscribed to his family doctor, as well as an unpublished, autographed letter by Charles Darwin detailing his theory of evolution. View any of these lots and register to bid by visiting Bonhams.