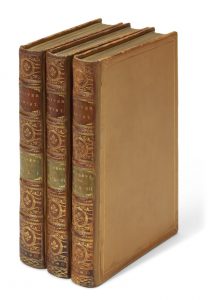 The upcoming Sotheby’s auction of English Literature, History, Children’s Books, and Illustrations will present nearly 100 items. Available in the sale is a copy of the script for the movie The Third Man (1949), signed by actor, director, and writer Orson Welles. His signature appears beside his famous “Cuckoo Clock” speech, which was an improvised addition to the screenplay by Graham Greene. Other signed items in the sale include a letter from Winston Churchill to Neville Duke, in which Churchill acknowledges Duke’s “stoic bravery” after a tragic accident at the Farnborough Air Show. Duke was a pilot who flew Kittyhawks and Spitfires in North Africa during World War II.

A few of the first edition books up for bid include a signed copy of For Whom the Bell Tolls by Ernest Hemingway, a first trade edition of The Tale of Peter Rabbit by Beatrix Potter, and the first Edinburgh edition of Poems, Chiefly in the Scottish Dialect by Robert Burns. Beyond documents and books, a selection of drawings and watercolors will be available, as well as a cigarette case once owned by Winston Churchill. View any of these lots and register to bid on Sotheby’s.