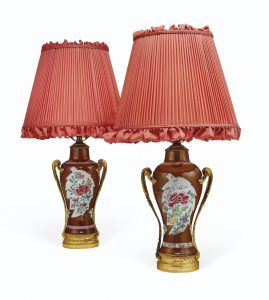 Edward F. Caldwell & Co., a New York-based company, was established when Edward F. Caldwell joined forces with Victor von Lossberg in 1895. The decorative metalwork manufacturer was considered a leading producer of the time. They designed a range of custom decorative pieces such as lanterns, marble torchères, metal gates, and more. In the upcoming Christie’s auction, a pair of vintage American marble torchères from Edward F. Caldwell & Co. will be available. The piece depicts two half-clothed figures: a bacchante and a satyr, each holding a cherub on their shoulders.

This live auction will also bring a pair of George IV wine coolers. Using the cast and chased technique, the offered piece is engraved with mythological scenes. The Greek god of wine, Bacchus, and Cretan princess Ariadne are shown surrounded by dancers. For more information and to bid for the above-mentioned items, visit Christie’s.