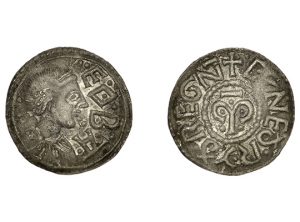 During the reign of King Offa in the 7th century, Mercia’s coinage went through multiple changes. In one of the major changes, the coins bore the image of his queen, Cynethryth. She became the only Anglo-Saxon queen to appear on a coin during the Middle Ages. An example of this particular coin will lead the upcoming Coins, Tokens, Historical Medals, and Antiquities sale, presented by DNW Auctions. Alongside the portrait of Cynethryth is the name of the moneyer who issued the coins. The inscription reads CENEÐRYÐ REGINA (Queen Cynethryth) on the reverse.

Coin collectors can also find a pale gold Thrymsa that dates back to the Anglo-Saxon period. Around 600 CE, the Anglo-Saxons began making their first gold Thrymsa coins. The design of these early coins closely imitated gold Merovingian tremisses, the currency of late ancient Rome. This piece is one of only nine known examples of Thrymsa coins. Also highlighted in this auction are Roman gold coins featuring Carausius, Nero, and Agrippina II. For more information about these or any other lots, visit DNW Auctions and register to bid.