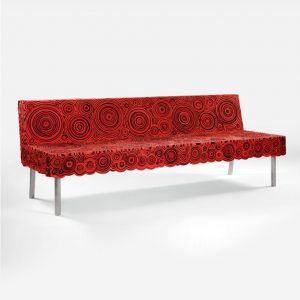 Sotheby’s presents Design, an offering that consists of an assortment of items from artistic movements such as Art Nouveau, Art Deco, European mid-century, American Studio, and Contemporary design. The auction items are anchored by a selection of works by Tiffany Studios from the celebrated Geyer Collection.

Among the Tiffany Studio lots is a Wisteria lamp, designed in 1901 by Clara Driscoll. Considered one of Tiffany Studio’s most successful models, it has a complex pattern made up of almost 2,000 individually cut and selected glass tiles resulting in each Wisteria lamp having distinct light characteristics and color palettes. The lamp is likely an early and experimental production expected to sell for more than USD 300,000.

More unusual Tiffany Studio pieces include the magnificent “Magnolia and Peony” window that was a key feature of the Feigenspan Mansion in Newark, New Jersey. This window surrounds a marble fountain in a kind of arch and may also have been supplied by Tiffany. The fountain is considered fundamental to the window’s design.

Beyond Tiffany, many utilitarian and beautiful pieces like the three pieces of the Standard Chair, model 305 by Jean Prouvé are available. Prouvé was a French metalworker, a self-taught architect, and a designer. At his studio in France, he produced furniture for schools, factories, and municipal projects. And although his designs were meant to be used by everyone, they are nevertheless some of the most iconic pieces for highly designed interior spaces. This sale also includes works by wide a range of 20th-century designers such as Archibald Knox, Louis Majorelle, George Nakashima, Paul Evans, Marc Newson, Dale Chihuly, Frank Lloyd Wright and more. Explore any of these lots and register to bid at Sotheby’s.