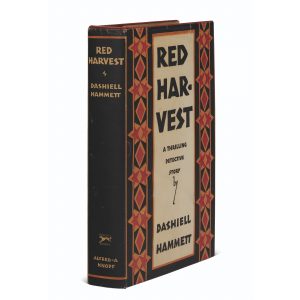 American author Dashiell Hammett was an operative at the Pinkerton Detective Agency before dedicating his professional life to fiction writing. The locations, stories, and characters in his books were inspired by people known to him. By depicting American crime through a rugged, realistic, and unrefined storytelling style, Hammett invented a genre now known as hard-boiled fiction. Part two of the Exceptional Literature Collection of Theodore B. Baum auction, presented by Christie’s, offers a rare first state dust jacket edition of Dashiell Hammett’s Red Harvest. Another of Hammett’s works, The Maltese Falcon, is also available.

First edition copies of T. S. Eliot’s The Waste Land are also slated for auction. Other authors represented in the sale are Ernest Hemingway, F. Scott Fitzgerald, and William Faulkner. Among the notable lots is one of the 100 signed copies of Ulysses by James Joyce. To view the full catalog or to place a bid, visit Christie’s.