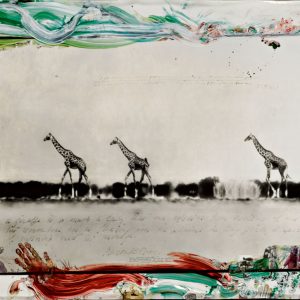 Of the many fine pieces up for bid, those that are likely to fetch the highest final price are two well-known works by Cindy Sherman from her “Complete Untitled Film Stills” series. These are prints from what is considered by many to be Sherman’s breakthrough work: 70 black-and-white photographs of herself in roles from arthouse films and popular B-movies. Sotheby’s estimates that the final hammer price of each of her Film Still lots in this auction will land well above $100,000.

Also of interest is a photo assemblage by David Hockney titled “David Watching the Snow Fall, Kyoto.” This particular lot is many photographs of the scene taken from a single spot, then reassembled into a scattershot panorama. The nature of the constructed work is reminiscent of the observed subject, that of snow falling. Hockney is an English painter, draftsman, printmaker, stage designer, and photographer. He was an important contributor to the pop art movement in the 1960s and is considered one of the most influential British artists of the 20th century. As a living artist, he has been honored several times with his pieces bringing in record prices.

Some of the most iconic and recognizable images at auction are those by Annie Leibovitz. Leibovitz is best known for her highly-engaging celebrity portraits that often feature subjects in intimate settings and poses. One of her best-known portraits (a print of which is on offer here) is that of John Lennon and Yoko Ono, in which a nude Lennon is wrapped around Ono, who is entirely dressed in black, taken just a few hours before Lennon was murdered. The situation under which the photo was captured as well as the striking intimacy of the subjects make this one of the most iconic celebrity photos of its time. There are several more photos by Leibovitz in this sale, including one of R2-D2, the speechless droid from the Star Wars series, captured while still at rest inside an open shipping box.

View any of these lots and register to bid at Sotheby’s.