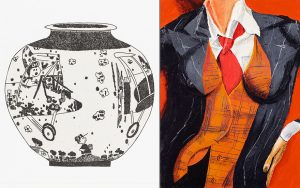 Curvy or straight, the strokes of contemporary art is redefining what is and isn’t acceptable. Contemporary art are works of artists living in the twenty-first century. They mirror the culture and society of their time offering their audiences a chance to rethink the familiar. From leading post-war and contemporary artists like Frank Stella, Andy Warhol, Joan Mitchell, Wayne Thiebaud, and others comes the 146 lot Contemporary Edition auction by Christie’s.Frank Stella, whose arts have been featured at Guggenheim and several important exhibitions have defined 1960s art. Featured in this auction is his woodcut and relief in colors named Pergusa Three, State I (1983) on TGL handmade and hand-colored paper. The Witch from myths comes to life in a screen-print (1981), signed in pencil and numbered 120/200 on the reverse by Warhol. Another good addition, out of many, is the complete set of three vibrant metallic porcelain multiples by Jeff Koons. This July Sale features striking prints, multiples, and something from the most famous to the freshest names in the contemporary world. Estimates start under $1,000 with all works featured online for bids at Christie’s.