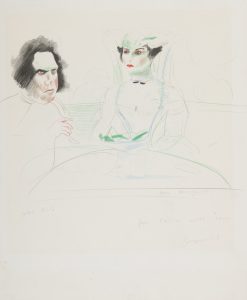 Andy Warhol created many artworks when considering consumerism and celebrity culture. Shoes, in particular, played an important role in Warhol’s career as a commercial artist. Many women’s footwear advertisements in the 1950s were later satirized by Warhol. An example of his work is available in the Contemporary Art Online Auction, presented by Sotheby’s. The available piece, Shoe with Diamond Dust, shows the sole of a shoe and an accompanying bow. This particular lot was made with silkscreen ink and real diamond dust. The upcoming event offers 17 lots of fine art created by artists such as Lee Ufan, David Hockney and Gene Davis.

In the late 1960s, Lee Ufan became one of the most famous artists of the Japanese Mono-ha movement. An oil and mineral pigment painting by Lee Ufan is being featured in this auction. His style emphasizes the use of raw, mineral, and industrial elements, defying the traditional notion of expressive representation. Browse the full catalog and register for online bidding at Sotheby’s.