Conflicts of the 19th & 20th Centuries 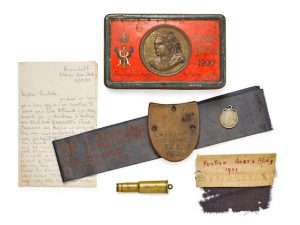 A set of original bomb plugs from “Little Boy,” the first atomic bomb dropped on Hiroshima during World War II, is currently up for auction in the Conflicts of the 19th & 20th Centuries sale, an online auction hosted by Bonhams. “Little Boy” became the first nuclear weapon to be used in warfare when the Enola Gay, the U.S bomber plane, dropped it on the Japanese city of Hiroshima on August 6, 1945. The available bomb plugs come from the personal collection of Lieutenant Morris Jeppson, who served as the Weapons Test Officer on the Enola Gay during the mission.

This upcoming timed sale offers a variety of military and war relics, including a historic United States Coast Guard ensign and navigational map from the USS LCI(L)-86. This flag was flown during the landings in Normandy on June 6, 1944. Additional lots include a pair of road signs from an intersection outside Bastogne, Belgium. The double-sided road signs have blue and white enamel over metal, displaying the distance in kilometers from Bastogne to Luxembourg. Another available American flag was the first to be raised in the Philippines during the Spanish-American War. View the complete catalog and register to bid online on Bonhams’ website.