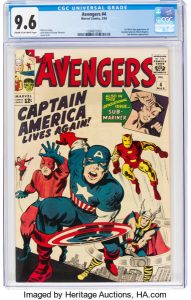 In 1988, Sony made plans to partner with Nintendo to create an add-on for the Super Nintendo. Three years later, as the plans were coming closer to fruition, Nintendo grew dissatisfied with the contract and worked behind the scenes to partner with another company, Philips, instead. At the 1991 Consumer Electronics Show, Sony unveiled the Nintendo PlayStation. At the same event, Nintendo announced their relationship with Philips, rendering Sony’s announcement and years of work null. Publicly available for the first time is a prototype of the Nintendo PlayStation, one of over 1,300 lots in the Comics & Comic Art Signature Auction, presented by Heritage Auctions.

This prototype was originally owned by the chief executive officer of Sony Computer Entertainment, Inc., Olaf Olafsson. It is still in playable condition, according to Heritage Auctions employees who played Mortal Kombat on the system. It can also play music through the CD-ROM drive, which Sony included for future CD-based games. “Sony” is written on the front of the controller and “Nintendo” on its back.

Featured comics in this auction include the Amazing Fantasy #15, which marks the first appearance of Spider-Man. The cover was designed by Jack Kirby, with artwork by Steve Ditko as well. This copy of the comic book comes to auction in near-mint condition. Also available is a copy of Superman #1, published by DC in 1939. The cover was designed by Joe Shuster. The circular picture of Superman on the back cover encouraged many children to cut it out, leaving a relatively low number of copies in good condition.

Interested video game collectors will also find a factory-sealed copy of Stadium Events: Family Fitness for the Nintendo Entertainment System. Only 200 copies of the game are known to exist. Shortly after its release, Nintendo purchased the rights to the game and immediately rebranded it. Those interested in this or any other piece can register to bid on the Heritage Auctions website.