Collection of Anne Marion Comes to Auction, Featuring Work by Andy Warhol and Others 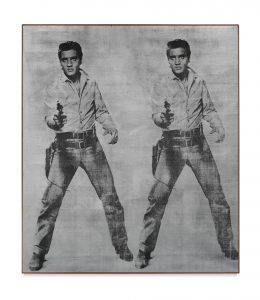 In her lifetime, philanthropist Anne Marion earned spots in both the Texas Business Hall of Fame and the National Cowgirl Hall of Fame. These dual honors are a testament to both her success in life and her commitment to the American Southwest. Now, eight artworks from her collection will come to auction with Sotheby’s.

One lot that demonstrates the influence of Anne Marion’s Southwest background is Elvis 2 Times by Andy Warhol. Viewers may be surprised to see Elvis holding a gun instead of a guitar in this canvas. The MoMA believes that Warhol used publicity shots for Elvis’ 1960 Western Flaming Star to create this work. Elvis saw the film as an opportunity to show his acting chops in a dramatic role, but the movie only reached 12th place in the domestic box office.

One of Still’s colleagues at the California School of Fine Arts, Richard Diebenkorn, will also have a piece on offer. Ocean Park #40 is part of a series of abstract works Diebenkorn created towards the end of his life. The artist was inspired by the ocean view near his Santa Monica studio, ushering in Diebenkorn’s second abstract phase. View each of the lots coming to auction from Anne Marion’s collection on Sotheby’s website.