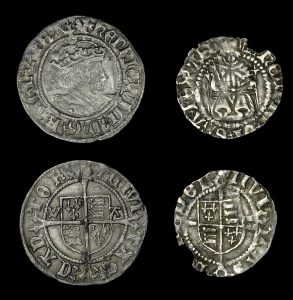 Following the death of his father in 975 AD, a 13-year-old boy named Edward became the king of England. He ruled for three years before he was assassinated by supporters of his half-brother. A 10th-century coin found on the Isle of Wight is highlighted in the upcoming Coins event, offered by Dix Noonan Webb. The silver penny features a portrait of the young King Edward on the front with the words ‘AELSTAN M’O CANT’ on the back.

When the British first colonized Australia, they did not bring along currency. To overcome the resulting issues with trade, Governor Lachlan Macquarie shipped 40,000 Spanish dollars to the colony in 1813. A hole was punched in the center of each coin, creating two variations: the ‘Holey Dollar,’ valued at five shillings and the ‘Dump,’ valued at 15 pence. This sale features an 1813 Australian Dump coin with a crown pictured on one side. Interested collectors can also find examples of Thai currency. Register to bid online by visiting Invaluable.