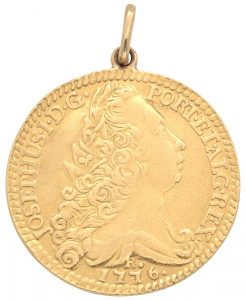 St. Gaudens $20 gold coins are among the most sought-after American coins for their value and design. The $20 St. Gaudens coins were produced between 1907 and 1933. They were named after Augustus Saint-Gaudens, a celebrated American sculptor who was asked by President Theodore Roosevelt to beautify American coinage. The upcoming Doyle auction features a series of St. Gaudens gold coins, including a 1922 example. During the 1922 recession in the United States, production of most coins and notes was stopped. The St. Gaudens were the only coins that continued to be minted for their high value and their use in international exchange.

The Coins, Bank Notes, & Postage Stamps Auction also presents multiple George V British gold sovereign coins. As the George V gold coins were the only coinage in circulation during World War I, they are also known as “WWI coins.” The offerings will include British currency minted in South Africa and Australia as well. During the rule of the British Empire, the British gold sovereigns were in production at the Royal Mint and its branches in Australia, Canada, India, and South Africa. The auction also showcases a collection of worldwide stamps and American mint state stamps, in addition to Austrian, Mexican, and Hawaiian silver coins. Interested collectors can explore the full listings and register to bid online on Doyle.