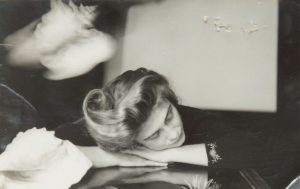 Some of the most recognizable and popular works in this auction are those by landscape photographer Ansel Adams. Two stunning photos of America’s natural scenery are included: Moonrise, Hernandez, New Mexico, and The Grand Tetons and Snake River. The clarity and depth of Adams’ “pure photography” have defined his style. Another valuable print depicts a cotton sharecropper photographed by Walker Evans. An American photojournalist best known for his work with the Farm Security Administration, Evans spent his time documenting the effects of the Great Depression. His goal was to take pictures that were “literate, authoritative, transcendent.”

One of the more unique images at auction is Man Ray’s Rayograph. This photogram is signed and dated in pencil, annotated ‘Haut,’ and includes the photographer’s Parisian studio stamp on the reverse. Ray coined the term “rayographs” to personalize the exposure photography that produces photograms. View any of these lots and register to bid at Sotheby’s.