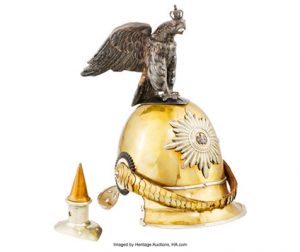 Heritage Auctions‘ upcoming event brings to auction nearly 200 weapons, uniforms, and wartime photographs. Among the highlighted lots is a frock coat and hat worn by Corporal George Schmultz during the American Civil War. Schmultz fought for the Union in the 188th Regiment of the Pennslyvania Infantry. Heritage Auctions notes that the lot is in good condition and comes with original patches.

Also representing the American Civil War is a photograph of Sergeant Charles English of the 108th Regiment of the United States Colored Infantry. The group moved across Kentucky, Illinois, and Mississippi over the course of the war. English became ill and died in Vicksburg, Mississippi as the war was ending. The photograph in this auction is a carte de visite, or small calling card, which was popular in the mid-19th century.

Several weapons are highlighted in this auction, including a pair of Beretta S06 EELL shotguns. Also available is a wakizashi, a Japanese blade usually associated with the samurai. Register to bid and view each lot on Heritage Auctions’ website.