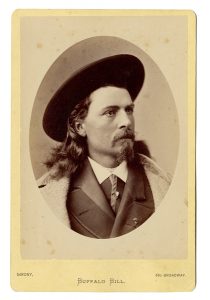 In the 19th century, an American soldier and bison hunter, William Frederick Cody—better known as Buffalo Bill—created a show based on his own life. According to the Legends of America’s website, Buffalo Bill’s wild west show was billed as one of the entertainment triumphs of the ages as it toured through Europe. Numerous posters, CDVs, and card photographs of the show are being featured in the upcoming Circus, Slideshow & Oddities Auction.

Besides collectibles from the Buffalo Bill show,  will also present items from the circus, including Raymond & Company’s 1847 poster advertising a menagerie of animals.  The border of the poster is lined with woodcuts of the animals, while the center image on the poster depicts a golden chariot. Other available items include seven photographs of P.T. Barnum’s home along with a color lithograph poster of the Great London Circus. To bid for the above-mentioned items and more, visit Invaluable