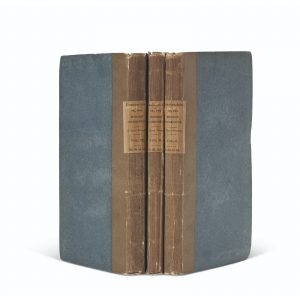 Originally published anonymously on January 1st, 1818, Frankenstein had a small print run of just 500 copies. Though the first edition included a preface written by Percy Shelley, the book received mixed reviews. Many thought that little would come of it. Mary Shelley’s masterpiece did find an audience eventually, with fans including the likes of Sir Walter Scott. The first day of Christie’s upcoming auction of Theodore B. Baum’s literature collection will feature a rare original copy of Frankenstein previously owned by Richard Manney. The available Manney copy is described as unsophisticated, crisp, and in clean condition.

The upcoming sale has many rare works of literature up for bid, such as the Silver copy of the first edition of The Origin of Species by Charles Darwin. This item was previously owned by John Silver, thus giving it the ‘Silver’ moniker. Other rare copies of well-known titles include the Second Folio edition of the works of William Shakespeare; a first edition, first issue, still in its wrappers copy of The Raven and Other Poems by Edgar Allen Poe; and a first edition, unsophisticated, still in its original cloth copy of Charlotte Brontë’s Jane Eyre. View any of these lots and register to bid on Christie’s website.