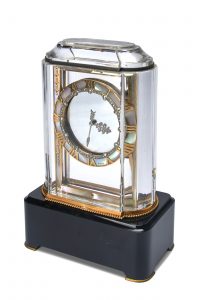 A Cartier mystery clock, known as Model A, headlines Christie’s upcoming auction. Manufactured in 1919, the piece is an early example of mystery clocks. Louis Cartier and master clockmaker Maurice Coüet, who had studied the clock designs of the famous French magician Jean Eugène Robert-Houdin, created the clock together. Pendules Mysterieuses Model A, first completed in 1913, was based on the art of illusion. Entirely handcrafted, mystery clocks required up to seven craftsmen to create, sometimes taking up to a year. The example available in this auction has a rock crystal case and a white enamel Roman chapter ring in the center.

The auction also features a Patek Philippe white gold wristwatch, ref. 3448. Reference 3448 was the world’s first serially produced automatic perpetual calendar wristwatch. According to the lot essay, “out of the 586 examples made, the majority [were] in yellow gold cases. Only around 130 were cased in white gold, 2 in platinum and 1 in pink gold are known to exist to date.” Interested bidders will also find an experimental prototype of the Panerai One Thousand Meter watch, a Vacheron Constantin tourbillon pocket watch, and a limited edition Audemars Piguet pink gold watch. View the complete catalog and place a bid on Christie’s website.