Chinese and Japanese Export Silver Online: Property from the Collection of Myrna and Bernard Posner 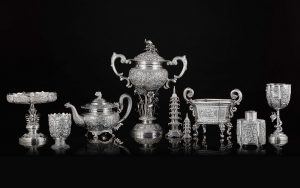 The Chinese silversmiths of the mid-18th to mid-20th centuries modeled their pieces after European styles.  Eventually they incorporated Chinese designs such as dragons, flowers, and bamboo into their works.  The Chinese and Japanese Export Silver Online auction by Christie’s represents the long-standing cultural and commercial trade between the East and West.

Highlighted in this auction is a magnificent Japanese silver cup. circa 1900. The cup features a flying dragon amongst the clouds with two dragons forming the handles. The base is accented with climbing dragons and crashing waves.  Another great item is a late 19th century Chinese silver, three-piece tea service.  This elegant set includes a teapot, creamer, and a sugar bowl in a George III style.  Estimates in the auction range from $500 to $8,000.  Visit Christie’s to view all 74 lots today.