Cherished: American Folk Art and Toys from the Estate of a Private Collector 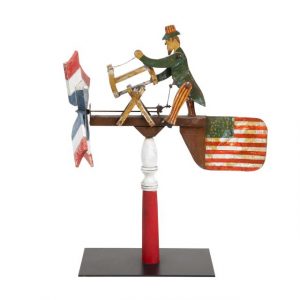 Ruth Whittier Shute and Samuel Addison Shute formed a married artist team, often working together on the same portrait at the same time. The couple traveled to small cities in northern New England and New York State as roaming portrait painters. The Shutes were particularly interested in creating portraits of children. One of their combined portraits, depicting two children of the Prescott family, is highlighted in Doyle’s upcoming auction, American Folk Art and Toys from the Estate of a Private Collector. The portrait depicts the two fashionably-dressed children respectively holding fruit and a whip, while their brown dog jumps on the older boy.

This auction of almost 400 lots features mechanical banks, decorative art, paintings, and works on paper. It also includes a selection of samplers and needlework pictures. Among these, a silk-on-linen pictorial sampler by Martha Mortimer Starr stands out. Examples of portraiture from America’s noted folk painters, including Jacob Maentel, William Matthew Prior, and Jane Anthony Davis, will be included as well. Explore the full listings and register to bid online on Doyle.