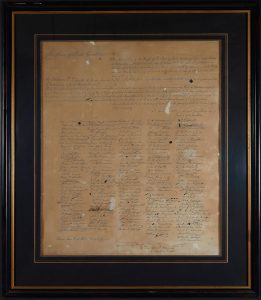 On December 20th, 1860, South Carolina removed itself from the United States of America with an official “Ordinance of Secession.” The document was signed by 171 South Carolinians. Approximately 200 copies of the South Carolina secession document were released as lithographs, many of which were sold as souvenirs. Some were also given to the signers. John D. Williams obtained a copy as a present for his daughter, Mary E. Williams. It was later passed on as a family heirloom. This copy of the South Carolina secession ordinance will come to auction in the upcoming 92nd Anniversary sale, presented by Charlton Hall.

Beyond written works, the auction will offer Asian antiques, decorative and fine art, furniture, and jewelry. Collectors may note a Tibetan ritual kapala (skull cup used in Hindu or Buddhist traditions) from the 19th century. Other items in the sale include a French gilt bronze mantel clock, art by Joseph Bowler and Alfred Hutty, a Palmetto armory model pistol from 1842, Lalique crystal bowls and swans, and more. View any of these lots and register to bid by visiting Charlton Hall.