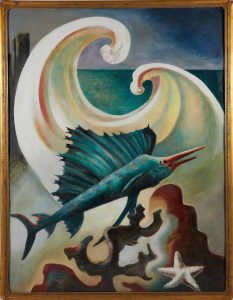 Thomas Hart Benton was an American painter and muralist closely associated with the Realist art movement in the United States. His paintings depicted everyday American life with a sense of fluidity. Benton’s Sea Phantasy I, an oil on tin panel painting, is among the highlights of Charlton Hall Galleries’ upcoming sale. Albert Briggs, a fisherman, commissioned Benton to paint sea motifs that would complement the look of his trophy fish. Sea Phantasy I was one among the four wall panels Benton created for Briggs’ room. Benton’s interest in the Synchromism art movement and Japanese prints inspired these vivid abstract compositions.

A Georg Jensen sterling silver soup tureen also leads the listings. The tureen features an oval lid, a melon and grape finial, and pinecone feet. Reverend William Thomas Manning received this tureen in 1931 as a token of recognition for his 10-year service in the Episcopal Diocese of New York. Another notable lot is the Rising Sun Armchair recreated by Stephen D. Van Ormer in 1987 to mark the 200th anniversary of the Pennsylvania General Assembly. The original Rising Sun Armchair was made in 1779 for the Speaker of the Pennsylvania legislature. To view the complete catalog and register to bid online, visit Charlton Hall Galleries.