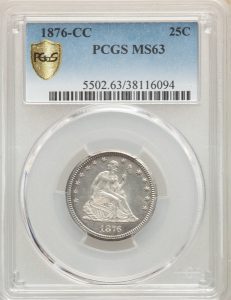 Leading the auction is a one-dollar 1889-CC MS61 by PCGS coin. Another highlight is an 1879-CC Capped Die dollar with die chips around the mintmark. Additional lots include an 1877-CC Double Eagle, $20 AU55. Since very few 1877-CC Mint State coins are ever seen, these are considered much scarcer than the 1875-CC and 1876-CC. View any of these lots and register to bid on Heritage Auctions.