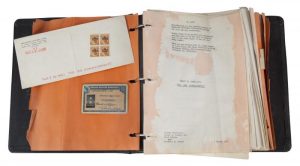 The upcoming ‘Icons & Idols: Hollywood’ auction by Julien’s Auction offers over 400 items taken out of the production archives and vault of Hollywood films, including Lord of the Rings, Star Trek, Superman, and Gone with the Wind. Highlights of the sale include Sir Ian Holm’s tobacco pipe from Lord of the Rings: The Fellowship of the Ring. The tobacco pipe will be the first Bilbo Baggins pipe that has ever appeared in an auction. The pipe, gifted to Randall William Cook on his 50th birthday from the film’s director, Peter Jackson, comes with the original birthday card, as well as a letter of authenticity from Cook.

The top highlight of the sale is Steve McQueen’s first Husky acquisition, a 1968 Husqvarna Viking 360 motorcycle purchased from motocross champion Bengt Åberg. Another highlight is a Superman cape worn by Christopher Reeve in the 1978 movie. The costume was part of a world-wide contest to promote the movie’s release in 1978. About 50 items from Star Trek will be offered for sale including a Vulcan T’Pau Starship model from Star Trek: The Next Generation and Star Trek: Deep Space Nine, William Shatner’s Captain Kirk Starfleet command jacket from Star Trek II: The Wrath of Khan, as well as uniforms and key costumes from the crew of Star Trek: The Next Generation. Additional lots include a 1930 18K white gold open face pocket watch belonging to Andy Warhol by Paul Ditisheim, and an original Emmy Award presented to The Tonight Show Starring Johnny Carson in the 70s. To view the entire collection and to register to bid, visit Julien’s Auction.