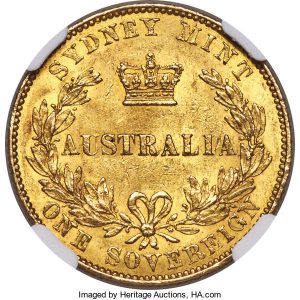 The upcoming monthly online auction, The José Rodrigues Collection of Victoria Sovereigns World Coins by Heritage Auctions, features more than 100 rare coins, mainly from Australia and Great Britain. The history of Sidney Mint dates back to 1855 when it started operating after the British Secretary of State approved the establishment of the mint in Sydney. In fact, it was the first branch of the Royal Mint beyond the shores of England. Alloyed with pure silver and occasionally with copper, the coins produced in the Sydney Branch were identical to the British coins with the distinction of mint mark.

One of the key lots featured in the auction is the Victoria gold Sovereign 1879 MS61 by NGC, which is the only one to be graded as mint state. The year 1879 saw only 20,013 sovereigns in heavy circulation, and the specimen survived with limited handling. Another highlight is the Victoria gold “Shield” Sovereign 1883-M MS63+ NGC released by the Melbourne mint.

To view the complete catalog and register to bid online, visit Heritage Auctions.